OK, first things first. It ought to be 4-Way Street. Hyphenated. Oh, well.

Crosby, Stills & Nash became Crosby, Stills, Nash & Young at Woodstock and went on tour shortly thereafter. They produced the masterpiece Déjà Vu, which came out in March of 1970, and then embarked on a huge summer tour, during which their backstage animosity eventually led to a four-year hiatus, famously remarked upon on The Mothers’ Fillmore East, June 1971 album: “Three unreleased recordings of Crosby, Stills, Nash & Young fighting in the dressing room at the Fillmore East!” 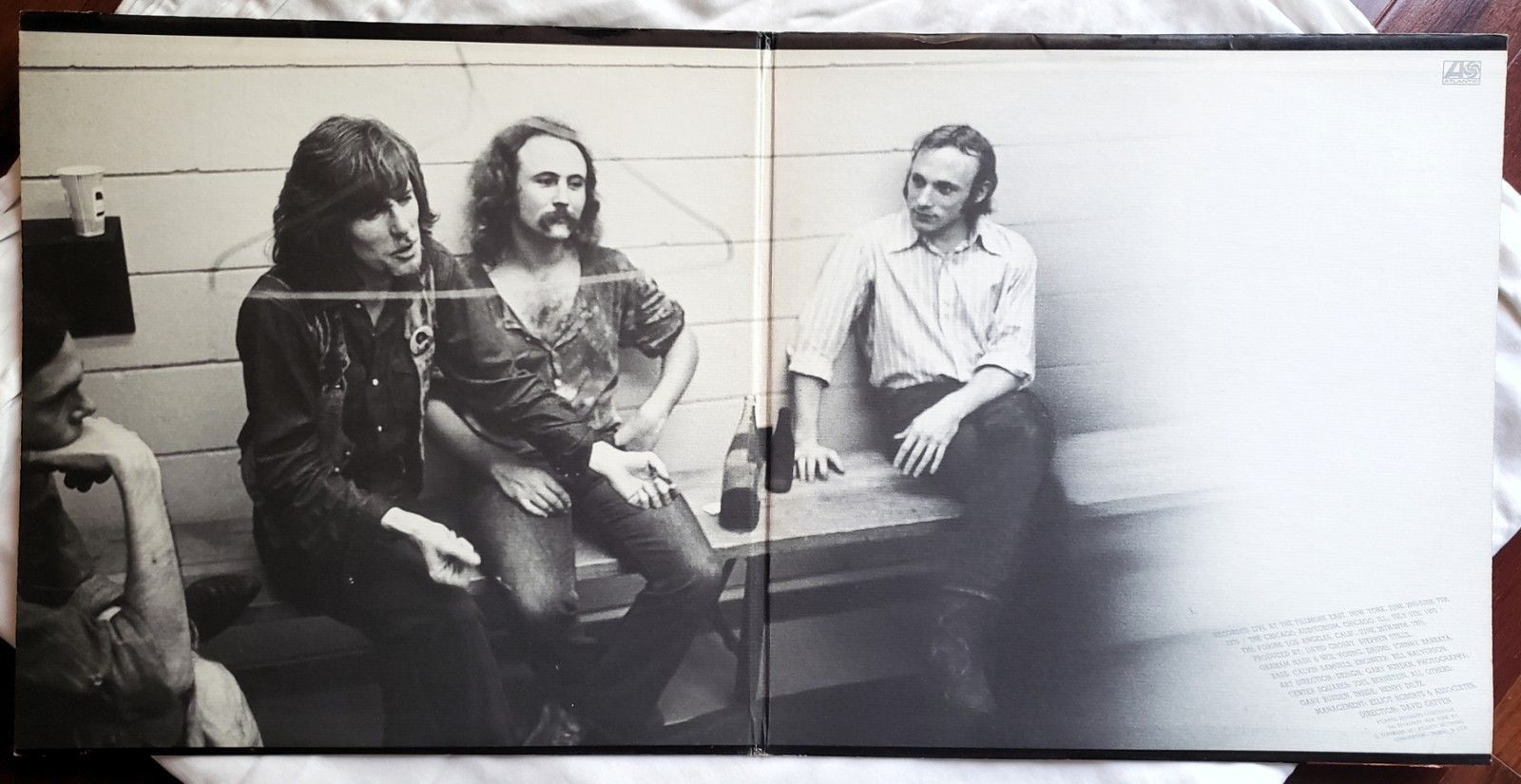 4 Way Street was compiled from various shows on that summer tour, including June 2–7 at Fillmore East, New York, June 26-28 at The Forum in Los Angeles, and July 5 at the Chicago Auditorium. The original double album featured two sides of wooden (acoustic) music, primarily solo performances, and two sides of electric music (plus a wooden encore).

The group’s wild popularity, despite the fact that they had parted ways, at least temporarily, ensured that the album shipped gold (half a million units) on April 7, 1971. With no internet and sketchy press, we wouldn’t discover until later about their squabbles and the hiatus.

We have included the four acoustic tracks added for the 1992 CD edition, one from each member.

The album opens, wisely, with just the coda to “Suite: Judy Blue Eyes” [Stills] (0:33). No version of the song is ever going to match their debut at Woodstock.

Graham Nash then introduces “our friend Neil Young, who begins with an old Buffalo Springfield tune, “On the Way Home” [Young] (3:48). The harmonies here are glorious.

Nash then notes that “Teach Your Children” [[Graham Nash] ] (2:46) is a song “from our second album,” the venerable Déjà Vu. When Nash encourages “everybody to sing with us,” be assured that everybody knew the words. More fine harmonies.

“Triad” [David Crosby] (5:07) is the incredible song Crosby wrote that Jefferson Airplane covered so superbly on Crown of Creation. Crosby’s voice here is absolute perfection, and his guitar playing is lovingly understated.

Nash joins Crosby for the beautiful “The Lee Shore” [David Crosby] (4:14). Hearing them together helps you understand why this duo was the most lasting and prolific of all the combinations and permutations of CSN&Y. 50 years later, this still brings tears of joy.

Nash then dedicates “Chicago” [Graham Nash] (3:03) to Mayor Richard Daley; he plays piano with Crosby of harmony vocal. This would appear on Nash’s debut solo Songs for Beginners (1971).

Crosby then says, “This is a song you have not heard before.” After a false start, ”Right Between the Eyes” [Graham Nash] (2:19) pours out, with that brilliant line: “A man’s a man who looks a man… right between the eyes.”

Young returns to his 1968 album Everyone Knows This is Nowhere for a lovely “Cowgirl in the Sand” [Neil Young] (3:50).

“Don’t Let It Bring You Down” [Neil Young] (2:35) is a track from his current album After the Goldrush (1970), with a self-deprecating introduction. These two songs highlight the strengths of Young as an acoustic artist.

Young then introduces Stills, a former bandmate in Buffalo Springfield. ”49 Bye-Byes/America’s Children” [Stephen Stills] (4:07) is a piano workout for Stills, who twists the song from the first CS&N album into an uptempo rocker with lyrics from “For What It’s Worth.”

He follows that with the band’s very popular “Love the One You’re With” [Stephen Stills] (2:57).

“King Midas In Reverse” [Graham Nash, Allan Clarke, Tony Hicks] (3:43) is another offering from Nash and quite a notion at that.

“Black Queen” [Stephen Stills] (6:45) is a reprise of a brilliant acoustic country blues workout that appeared on his eponymous debut (1970).

The Young add-on is a medley of the opening track from his 1969 eponymous debut and two more songs from Everybody Knows This is Nowhere: “Medley: The Loner/Cinnamon Girl/Down by the River” [Neil Young] (9:41). This is simply magnificent, so personal.

“Pre-Road Downs” [Graham Nash] (2:48) is a short take on another track from the CS&N debut, Nash’s voice in the lead and fabulous harmonies swirling. “Be sure to hide the roaches.”

The tempo on “Long Time Gone” [David Crosby] (5:33), another song from CS&N, is so perfectly stretched out, either Stills or Nash on organ, guitars soaring. Even if you’ve listened to the album a bazillion times, that places where they sing “Speak out… you’ve got to speak out against the madness” and then that organ, you can still feel that electric shock. [Confession: I forgot just how amazing this album is.]

Young then intones, “This is usually a really long song, folks, and we’re gonna take it real slow tonight,” leading into the guitar romp of ”Southern Man” [Neil Young] (13:15), another track from After the Goldrush. The drummer for the electric tunes is Johnny Barbata, an incredible talent, joined by Calvin Samuels on bass; both of them played on Stills’ solo debut. Organ is either Stills or Nash. For certain Young and Crosby are wrangling guitars.

“Ohio” [Neil Young] (3:24) was a brand new single, recorded May 21, 1970, in response to the Kent State shootings and released in June, just before these concerts. It was splashed all over the radio that summer, but this must be an early one, given no crowd recognition.

Yes, the guitars, organ, and harmonies are delicious here, but give Samuels and Barbara credit; they blow ”Carry On” [Stephen Stills] (13:06) sky-high. The jam here is just incredible, featuring a world of guitars.

Closing with the wooden take on “Find the Cost of Freedom” [Stephen Stills] (2:16), Side Four contains three truly anthemic tunes from Crosby, Stills, Nash & Young. This was the flip side of “Ohio.”